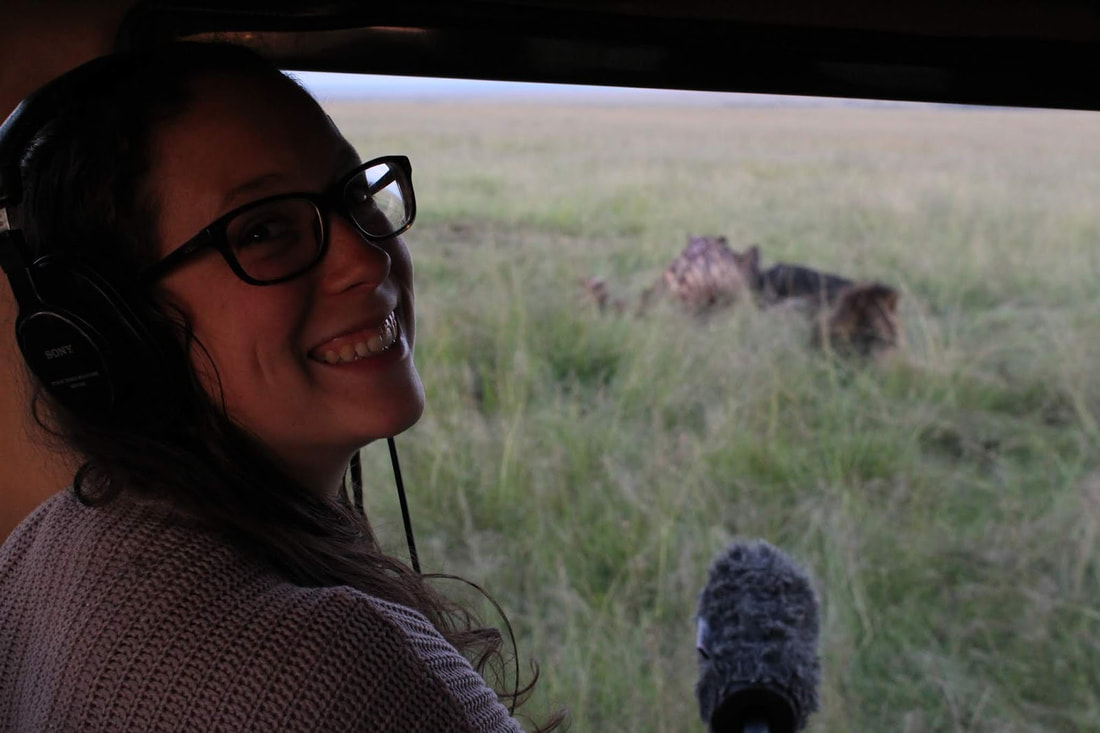 Former RA Emily Nonnamaker captures hyena vocalizations at a carcass session
And so it was that on the 7th of November, Jessica Gunson - bright-eyed and bushy-tailed research assistant - set out for solo obs and stumbled upon a carcass session, turned high speed chase, turned lion-hyena interaction, turned SECOND carcass session.

At 6am, as I paused to take a sip of my coffee, I began to hear loud whooping and growling coming from down the road, in Happy Zebra territory. I stowed my travel mug and took off to investigate, heading off road and directly into a carcass session. It appears a low-ranking immigrant male had killed a wildebeest over night, and there were now 12 hyenas vigilantly standing by as subadult KNG feasted. Because this was solo obs, I quickly jumped into action. I pulled out our audio equipment (pictured below) to begin recording vocalizations for one of our graduate students. I simultaneously whipped out my camera to film behaviors, and grabbed my hyena ID book to start confirming the identity of the hyenas present.


Suddenly, a whoop rang out from the east. We all (myself and 18 hyenas) paused and looked in this direction and then… they took off! At breakneck speed, 17 of the 18 hyenas present loped to the east as I frantically attempted to follow. We had travelled for over 2km when I spotted it – 5 female lions feeding on a wildebeest. There were already several Happy Zebra hyenas here, nervously pacing as they awaited reinforcement. What happened next cannot be adequately described in words, so I’ve included a video at the below link 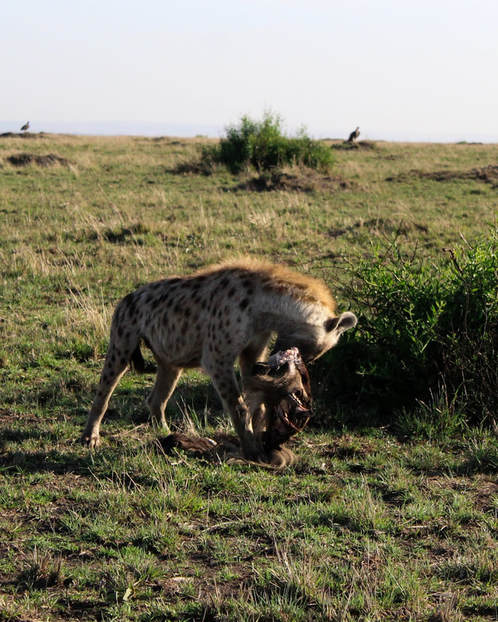 Bonus: The one hyena who stayed behind at carcass #1 was SKEP. She may not have the team spirit, but she sure is smart.
It takes 4 hyenas to overpower 1 female lion, so with the arrival of these 17 hyenas (and I), the group was victorious and took the wildebeest. I sat in silence. Awed at the cooperation and bravery of my dear Happy Zebra hyenas. When it comes to hyenas – teamwork makes the dream work.
Flirting
Thursday, October 18th, 2018
Much like kids on the playground, when a spotted hyena male has a crush on a female he begins a complicated set of behaviors similar to flirting. Female spotted hyenas are larger, more aggressive, and socially dominant to males, so interested males must carefully follow a set of courting behaviors in order to gain favor with and avoid a good bite from females. These behaviors are sometimes antagonistic, sometimes submissive, and sometimes downright bizarre.

Courtship behavior often starts as it does in humans. A male will pick out a lady he finds particularly attractive and attempt to get close to her, even following her around in the hopes she’ll take a liking to him. 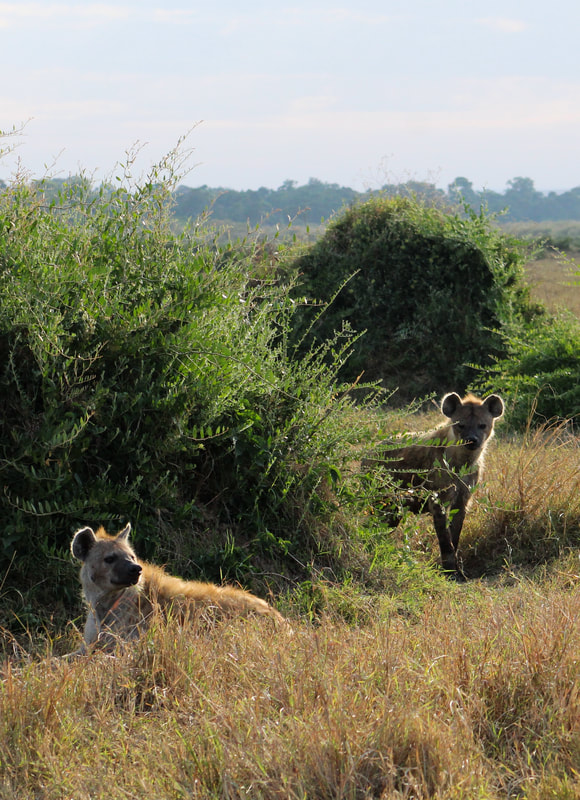 Watch our Sauer! He's right behind you!
One of the most common courting behaviors we see is called an “approach avoid”. This behavior looks exactly as it sounds- males will rapidly approach a female and then rapidly retreat. Because males are so nervous around these large-and-in-charge ladies, they will run away even if the females completely ignore them. If a male approaches a female several times from a distance (sometimes as far as 10m) and she does not attack him, he’ll get closer and closer to test the waters until she’s fed up and lunges him away. He’ll keep up this behavior, even after being attacked by a female, if he’s particularly infatuated. This is a way for males to assess how aggressive a female is feeling, and how receptive she is to his proximity. 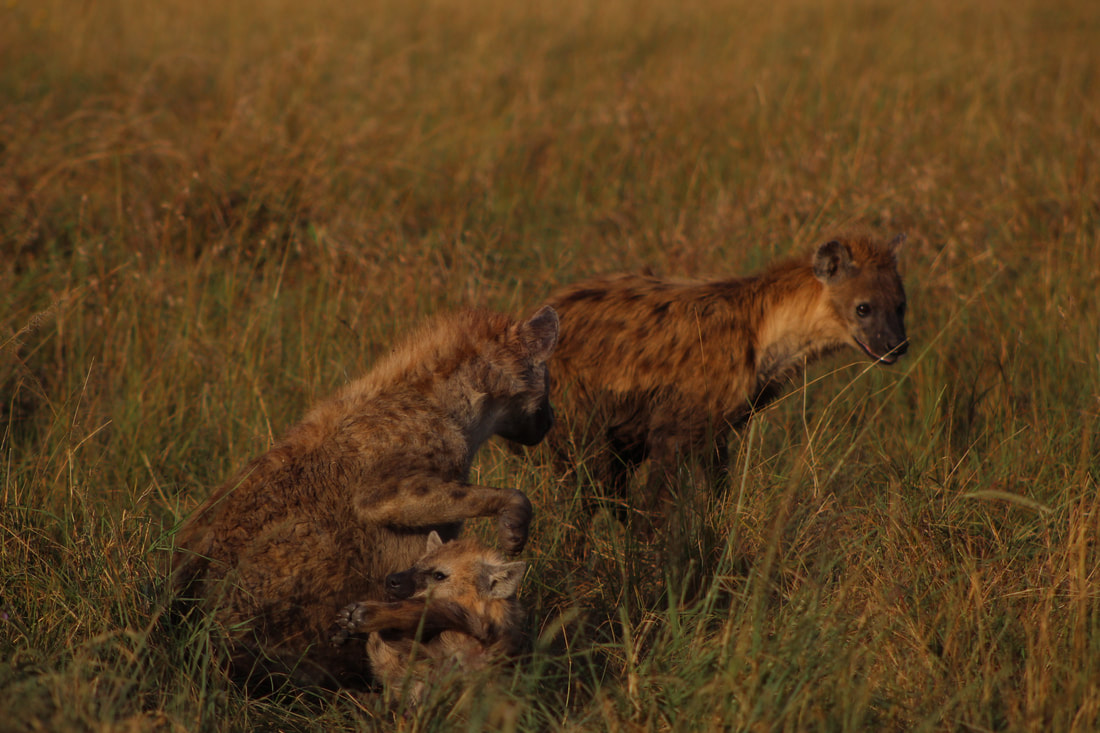 Toledo realizing he's made a mistake as Whiz lunges toward him.
​Once a male has approach-avoided his way up close to his female of choice, he will then perform some smaller, equally as frantic, behaviors to attract her attention. One of these behaviors is pawing ground and looks like a dog digging in the dirt. Males have interdigital (between toe) scent glands, and pawing the ground in the direction of a female serves to deposit his scent for the female to smell, much like a young boy making mud pies to gain the favor of his kindergarten crush. Next up is foreleg grooming. To ensure that his hair is looking nice and smooth, a male will begin licking his front legs in the direction of a female. 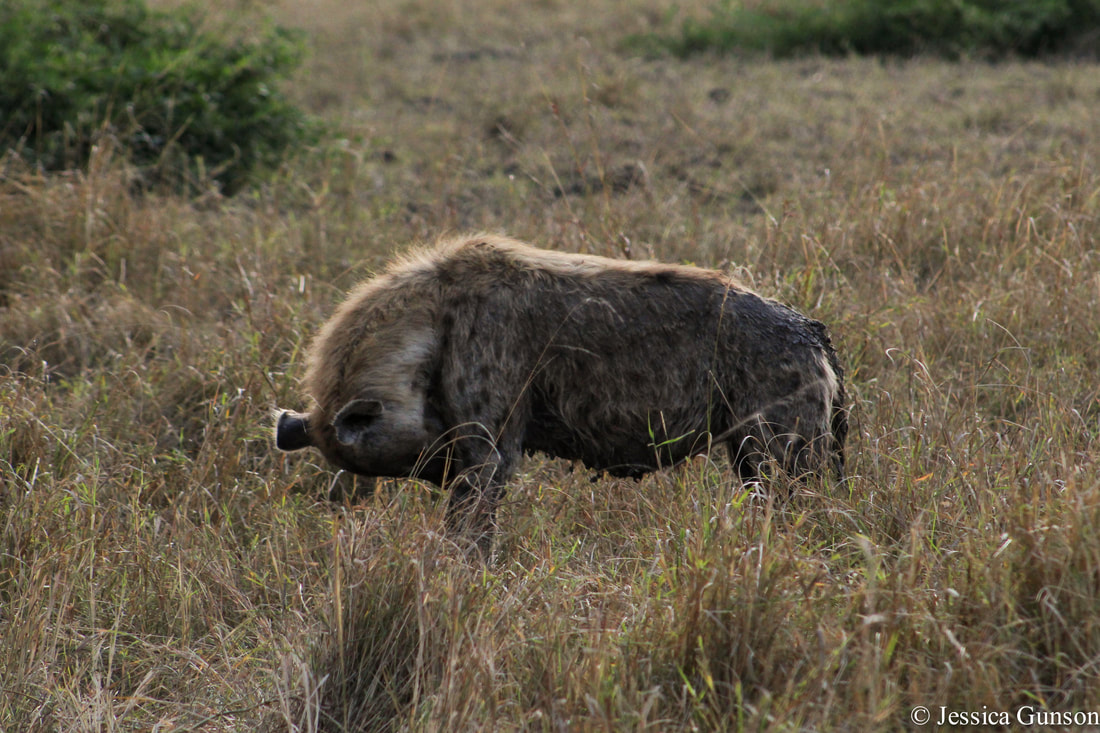 Leprechaun licks his foreleg.
​Finally, if all has gone well and his selected lady seems receptive to this male’s particular style of flirting, he will perform the ultimate courting act- the bow. A male will approach his female, lift one foreleg, and cross it over the other. He then bows his head in the ultimate act of submission. We are incredibly lucky to have witnessed this behavior as it is one of the most bizarre and magical behaviors that hyenas perform. 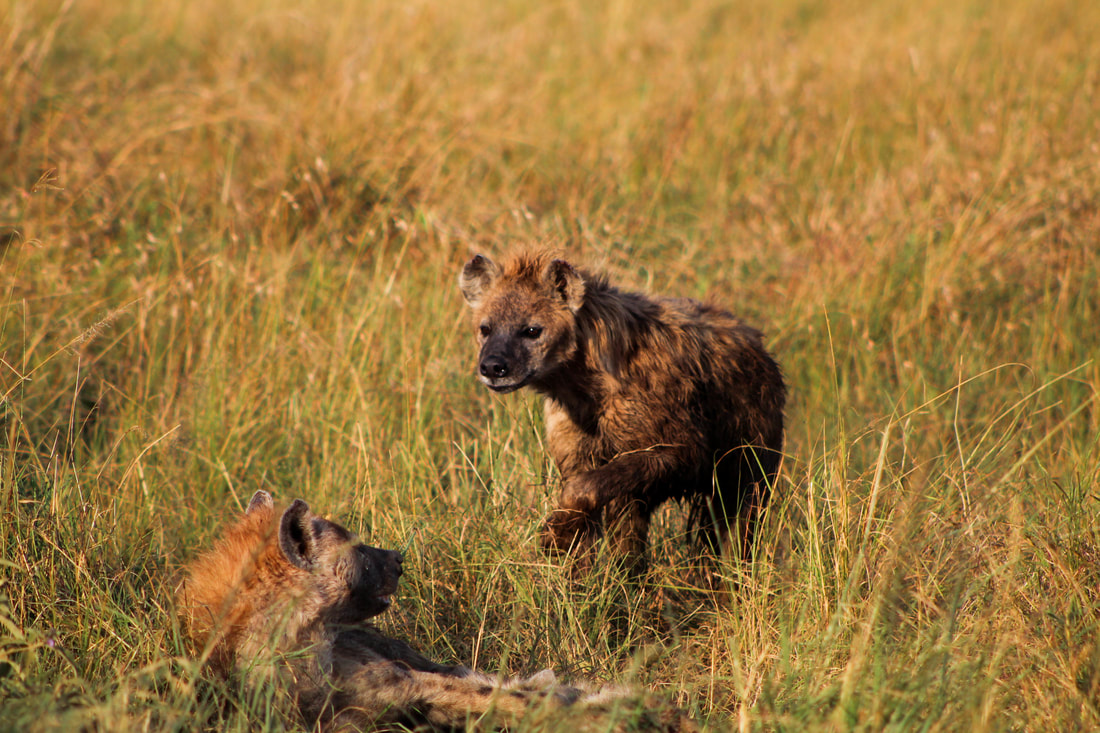 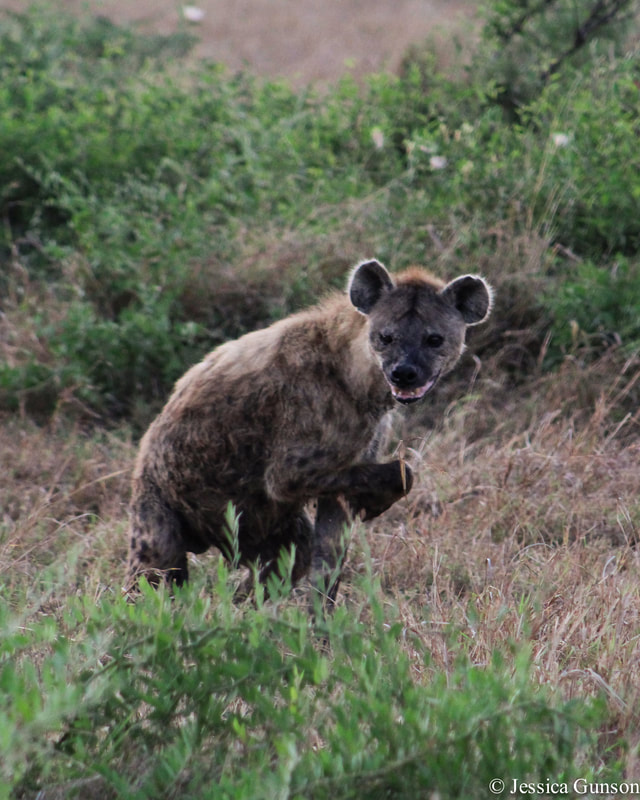 References
Szykman, M., Horn, R. C. Van, Engh, A. L., Boydston, E. E., & Holekamp, K. E. (2007). Courtship and mating in free-living spotted hyenas. Behaviour, 815-846.
Hungry Hungry Hyenas
Wednesday, July 25th, 2018
I’d been in the Mara for almost two months, and while I’d seen a myriad of incredible events (check out my last blog post for reference), I had yet to see my beloved hyenas hunting. Was this too rare, I wondered. Would I ever see hyenas hunting?

That’s when I got a call from safariLIVE, who said “your hyenas are hunting a hippo, get over here!” Grad student Julie and I raced to North territory where we saw the last 10 minutes of an epic battle. Our North clan had spotted this young hippo in the early light of dawn, and fought tooth and nail to separate it from its mother. 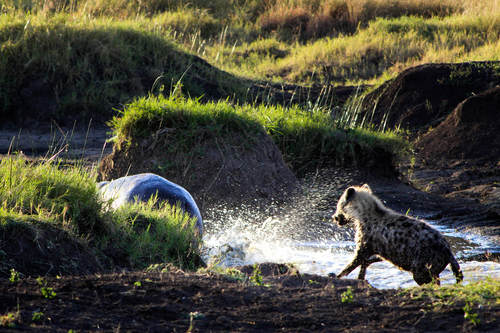 Hershey's doesn't mind the spray of cold river water.
They chased the hippo across land and lugga while it struggled to find water deep enough to dissuade our hyenas. What this hippo didn’t expect, however, is that our hyenas can swim. Where’s the Goat, Wallflower, and young Hershey’s bravely waded out deeper and deeper, dedicated to catching their prey, as matriarch Waffles and several of our young cubs watched from the shore. 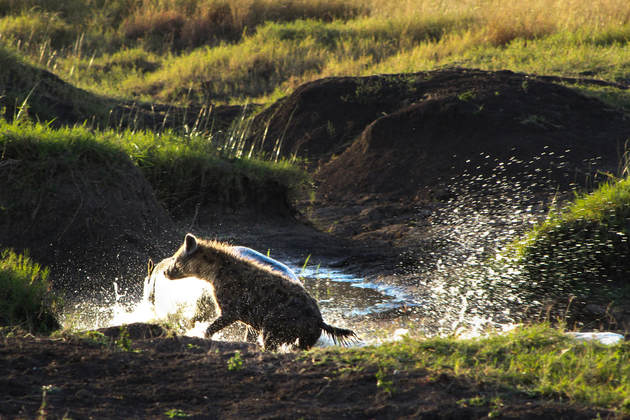 Wallflower closes in on the hippo.
We raced alongside, wildly IDing and snapping photos as our hearts pounded. Finally, the hippo had come to a crossroad. Its only option, its only shot, was to cross a wide, bare patch of land into the river on the other side. For a brief moment it would be incredibly vulnerable, but that river was the only spot deep enough to keep the hyenas off. 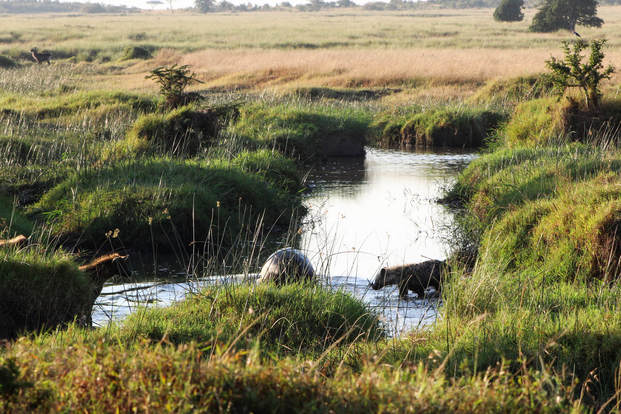 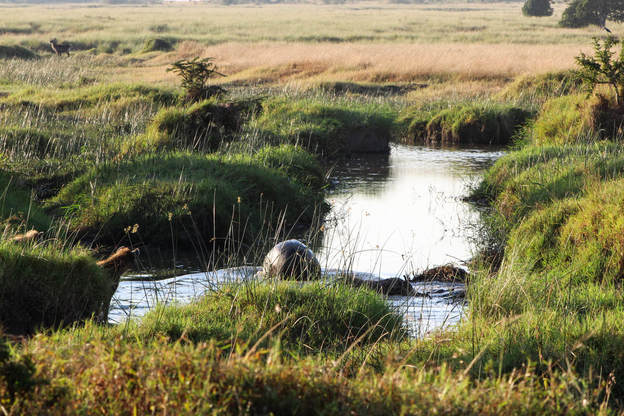 The hippo heads for deep water, but Where's the Goat is close behind.
We stopped the car and watched with bated breath as the hyenas lined up on either side of this bare patch of land. The hippo took one false start and we gasped... and then it was off! It tore across the land, eyes not wavering from the safe haven of deep water just in front. As though the checkered flag waved, the hyenas leapt forward and raced to catch the hippo. Hershey’s vaulted into the air, teeth snapping…. And the hippo got free! It splashed into the river and moved as quickly as possible, leaving North clan in the waves, and us researchers in astonished silence. 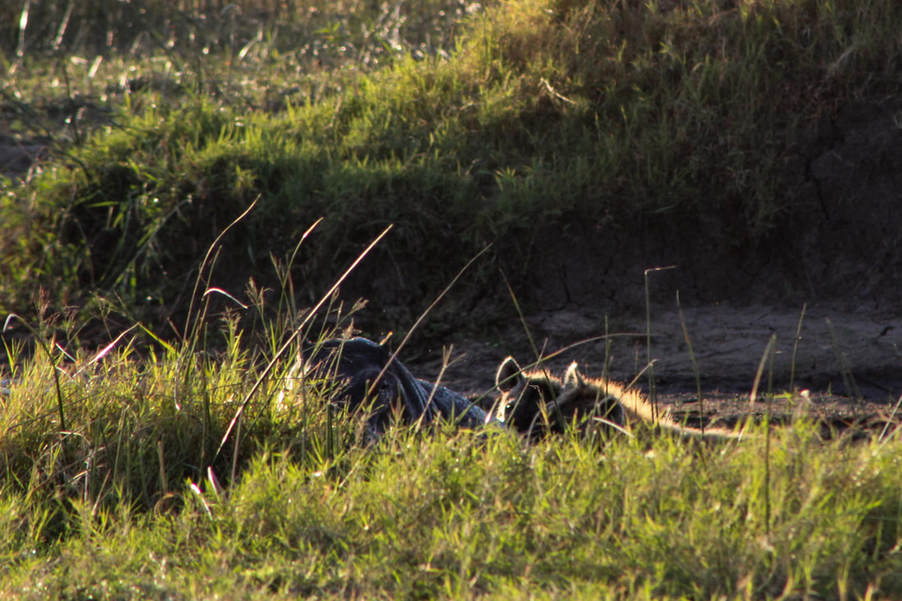 Hershey's and Wallflower getting a quick bite in before the hippo's escape.
Thank you so much to Jamie Paterson and the safariLIVE crew for this tip.
Mara Magic
Thursday, June 21st, 2018
Hey friends and family of the Mara Hyena Project, my name is Jess and I’m the newest RA on the Serena side of the Mara. I graduated from the University of Florida in 2016 (Go Gators!) and then spent one year studying olive baboon behavior in Laikipia, Kenya and one year studying the reproductive ecology of the little known Kinda baboon in Kasanka National Park, Zambia. The big switch from primates to carnivores has been incredibly challenging and rewarding in more ways than one, most notably through a little phenomenon we call Mara Magic. Unlike Trail Magic, the unexpected acts of kindness you come across while hiking, Mara Magic is a gift bestowed upon you by the Mara itself. It can be something as simple as a playful pile of cubs at sunrise or as fantastic as an all night lion-hyena carcass session. Here are some of the incredible instances of Mara Magic I’ve experienced in my first few weeks here. 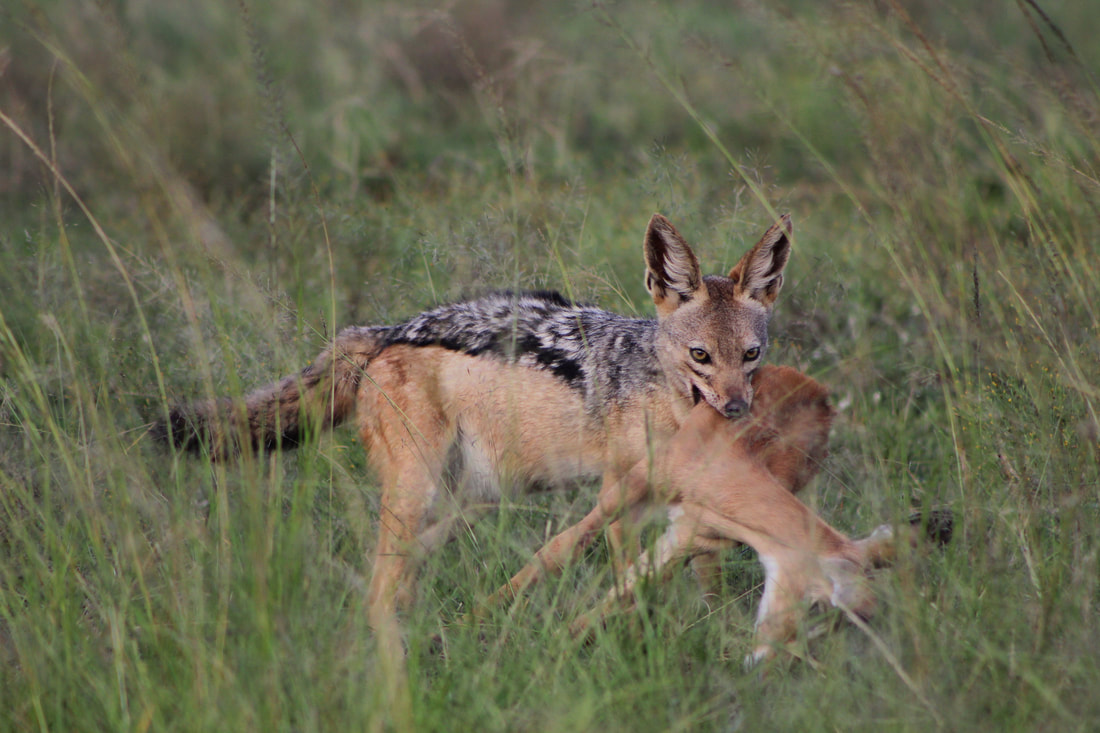 Day 1: We stumble upon a jackal with the upper half of an adult impala 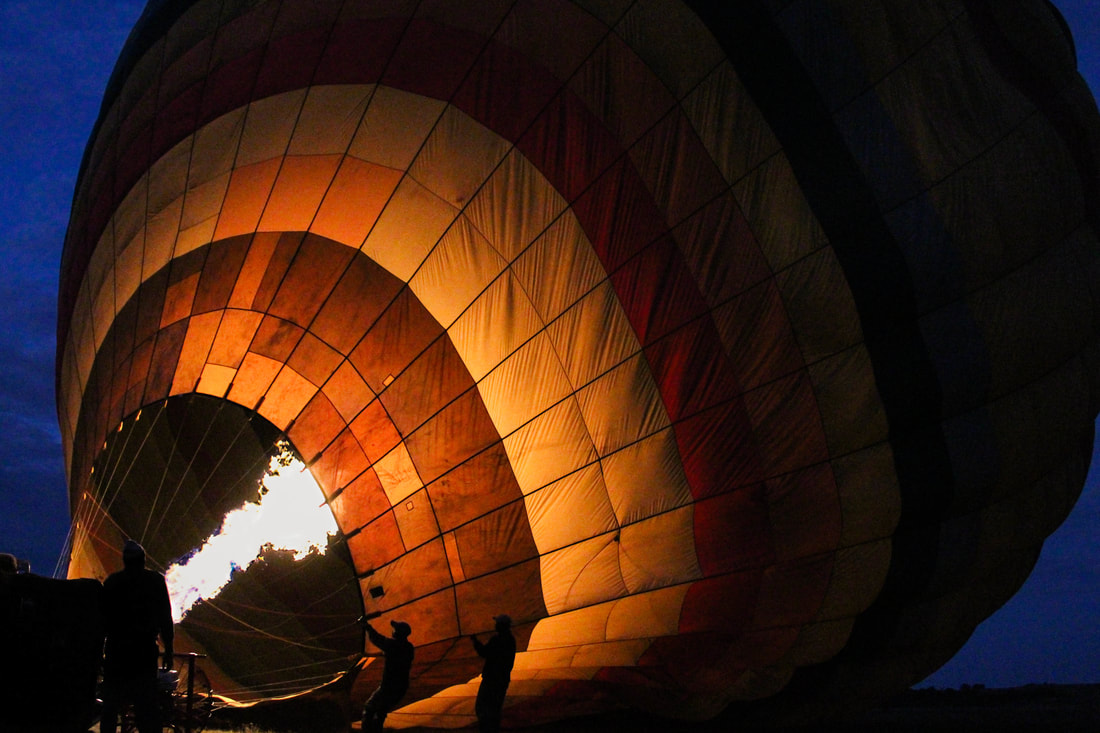 Day 7: I’m asked to fill a spot in a sunrise hot air balloon ride over the Mara 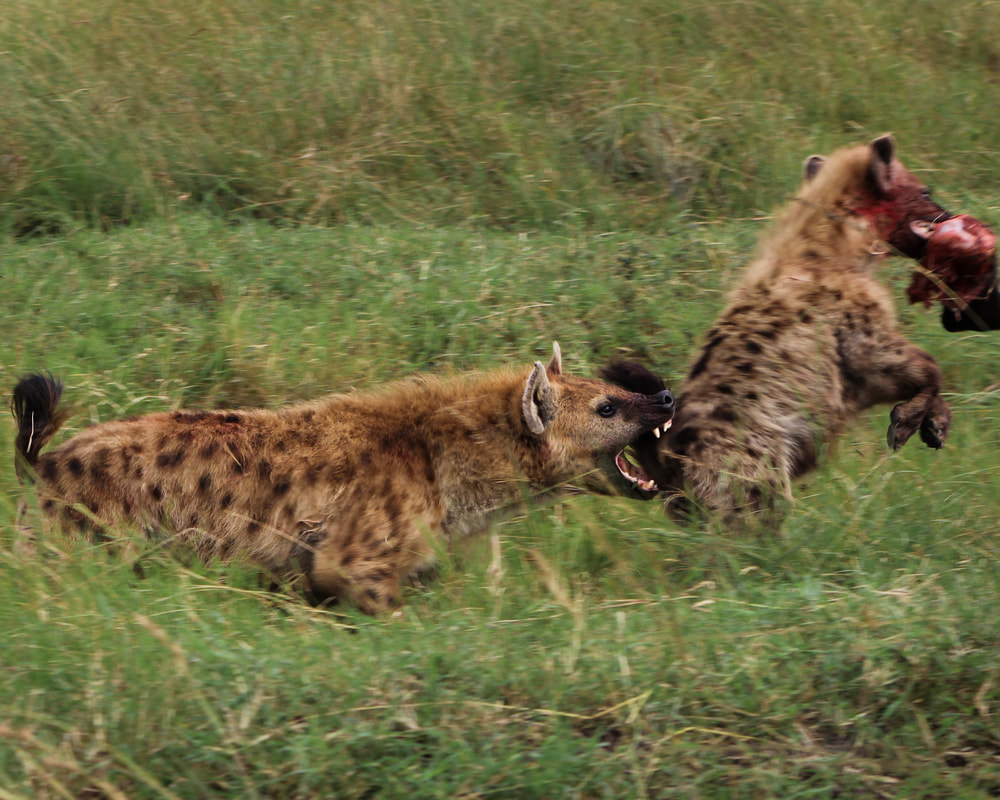 Day 10: My first day transcribing, we stumble upon a Happy Zebra carcass session and I get a crash course in aggressive behaviors
Day 13: A buffalo carcass turns into a late-night obs with the infamous Scar and his 3 brothers 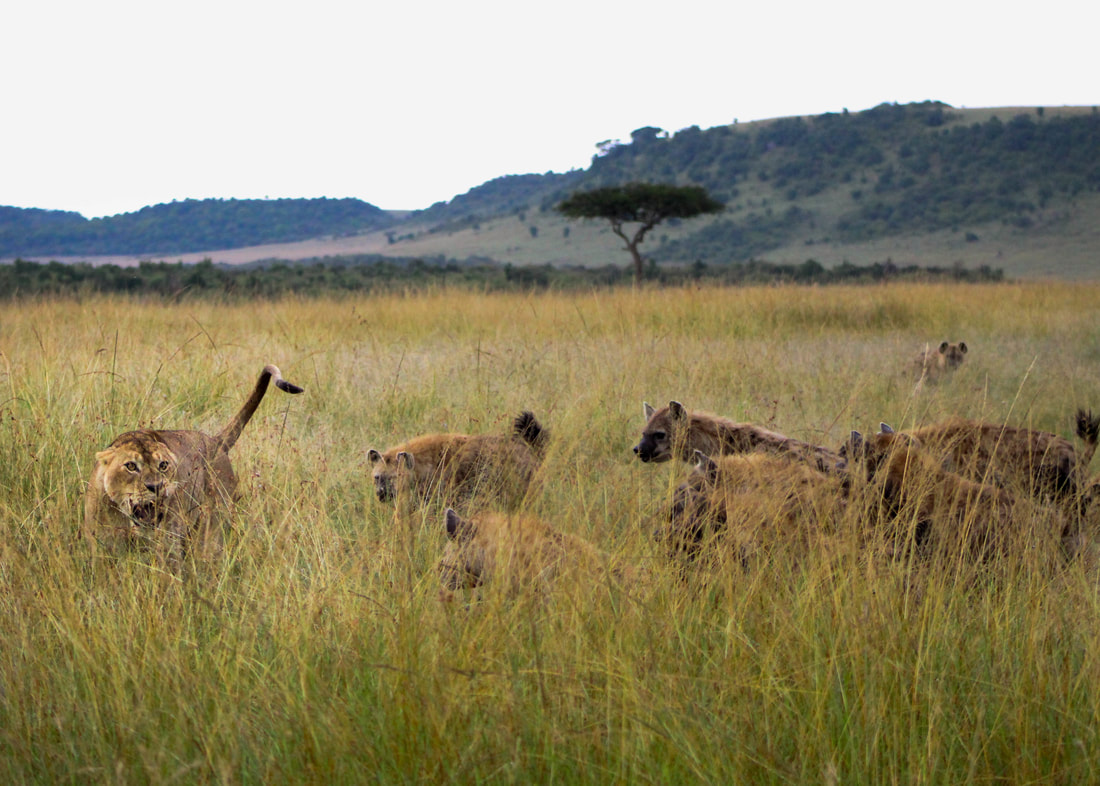 Day 20: On RA Emily Nonnamaker’s last morning obs, we find a hyena mob 30 strong chasing off a lioness
All of this, not to mention the cubs and my coworkers who make my heart sing daily, make me feel remarkably lucky to be a part of this project. I hope to share these little pieces of Mara Magic with you throughout the year on this blog and on the project twitter (@MSUHyenas) which I've just started up.